Iteration upon iteration of DeFi platforms simply exposes the necessity for the decentralized network of bitcoin to act as a base layer.

Ethereum is commonly referred to as the pinnacle of decentralized finance (DeFi). With more and more blockchains such as Solana, Cardano or Avalanche racing to fame throughout this year, more and more cryptocurrency enthusiasts are starting to doubt whether Ethereum’s pole position as the number one DeFi chain is really beyond reach.

The reasons for the rise of these alternative blockchains are swiftly found: Ethereum has turned from a hyper-inclusive idea into a hyper-exclusive blockchain for the wealthy. Its network is severely clogged up, and insanely high transaction fees need to be paid to transact on Ethereum.

Another problem that keeps on plaguing Ethereum (and other smart contract platforms) are the various smart contract heists and hacks. Seemingly month after month, there is news about a DeFi protocol on Ethereum having been hacked due to a smart contract vulnerability. Interestingly enough, Bitcoin’s blockchain is usually critiqued for being too rudimentary in terms of its smart contract capability, but what Bitcoin lacks in expressiveness, Ethereum appears to have too much of. Ethereum’s smart contracts are notoriously complex – one could even argue that they are unnecessarily complicated because of their Turing-complete nature.

Consistently-high transaction fees congesting the blockchain, as well as continuous hacks that cost users millions, are among the chief challenges Ethereum faces. Within the Ethereum community, people are diligently working on solutions. Hotly anticipated is Ethereum 2.0. While the excitement and the hope for improvement remains, some still believe that even this total overhaul of the Ethereum network might not enable Ethereum to scale to the capacity a global and efficient DeFi ecosystem will need.

Ethereum Has It Backwards.

Some would argue that Ethereum’s approach was flawed from the get-go as they have built the house first, only to recognize later that they also need to integrate a foundation. Back in 2014, Ethereum was launched as a world computer. As this world computer was developed, the demand for an infrastructure grew, giving rise to the massive appearance of Web3 applications in 2017. Again, three years later in 2020, DeFi got popularized as the need for payments persisted. With the significance of payments for financial applications growing, vocal exponents of the Ethereum community started recognizing the inevitable need for sound money.

Although most within the Ethereum community have denied that ether is money, or rather have stated that ether does not need to be money, the chickens are starting to come home to roost as the importance for a proper foundation, a sound money, resonates with more and more Ethereans. The question is though: With all the historical baggage and the path dependency Ethereum has maneuvered itself into by having it backwards, there remain big question marks about whether Ethereum will turn the corner or not.

Building On A Proper Foundation

So, are other blockchains like Solana, Cardano or Avalanche the better Ethereum after all? Not likely. When it comes to a foundational sound money, Bitcoin is unmatched. Compared to other blockchain assets, Bitcoin has had an immaculate conception.Also, Bitcoin has an elegantly simple monetary policy and an immutable supply freed from human discretion – something no other cryptocurrency asset can provide.

Bitcoin’s monetary policy is based on algorithmically-determined parameters and is thus perfectly predictable, rule-based and neither event- nor emotion-driven. By depoliticizing monetary policy and entrusting money creation to the market according to rule-based parameters, Bitcoin’s monetary asset behaves as neutrally as possible. Bitcoin is truly sound money since it provides the highest degree of stability, reliability and security.

Most crypto enthusiasts would probably object that while Bitcoin might be the soundest money, its technical capabilities do not allow for DeFi to be built on top of it. As a matter of fact though, nothing could be further from the truth. This may have seemed to be the case originally, as the Bitcoin approach was precisely to build out a real foundation first. Compared to Ethereum, Bitcoin has been doing it the other way around by building from the ground up.

A Full-Stack Monetary And Financial Order

As we speak, Bitcoin is morphing into a multi-layered financial order of its own, especially now with the implementation of Taproot said to be allowing “a clear path to smart contracts” on the Bitcoin network. Similar to the traditional financial system, Bitcoin is also built in many different layers. Serving as a foundation is Bitcoin’s base-layer asset. It can be considered a new digital base money.

This idea of distributed markets is exported to other layers as well. On top of this base layer, an infrastructure layer is emerging. This additional layer allows it to incorporate more sophisticated financial logic and consists of things like sidechains, second-layer protocols or alternative Layer 1 blockchains running in parallel to Bitcoin. The latter approach is pursued by Stacks as one of the latest examples. The most popular second-layer solution is Lightning.

On this second layer of Bitcoin, Ethereum-like functionalities can also be implemented. Offering this is the Bitcoin-based sidechain called Rootstock Smart Contracts (RSK). RSK’s blockchain works like Ethereum because of its Turing-completeness smart contract capability. Just like Ethereum, RSK has its own virtual machine (RVM), which allows for the execution of smart contracts. As a matter of fact, RSK allows for Ethereum dApps to borrow from Bitcoin’s security, which is why they are ultimately linked to bitcoin and not to ether. RSK’s native asset rBTC functions like a bitcoin surrogate backed by locked bitcoin, the base money held as collateral.

The alert reader might object at this point: While it might be a win to be tied to Bitcoin as the ultimate monetary asset and profit from its sound monetary qualities, RSK’s Turing-complete smart contract capabilities introduce the same complexity that ails Ethereum. So, is this any better? It might not be and only time will tell. With Bitcoin, this is not the end of the story. Bitcoin’s base layer allows for innovative alternatives to emerge on the infrastructure layers.

Another ambitious project attempting to broaden Bitcoin’s capabilities is Mintlayer. As a Bitcoin sidechain protocol, Mintlayer aims to bring financial applications to Bitcoin. Its self-described goals are to specifically eliminate Ethereum’s flaws. As such it also pursues a different approach than RSK. With Mintlayer, gas fees can be paid in any digital asset that is going to be tokenized on Mintlayer’s blockchain, giving users greater flexibility than known with Ethereum.

A decisive distinction is the fact that Mintlayer is non-Turing-complete. Still, the smart contract capability it plans to bring to Bitcoin should be just as diverse as that of Ethereum. After all, studies have shown that only 6.9% of smart contracts built on Ethereum’s virtual machine truly require functions of a Turing-complete language. It is also noted that the majority of Ethereum’s smart contracts can be coded to function the same way with a Turing-incomplete setup. This is how complexity can be avoided without losing expressiveness.

Mintlayer’s approach also plans on saving on transaction fees with features like transaction batching and signature aggregation. By combining Mintlayer’s infrastructure with the Lightning Network – another second layer protocol on Bitcoin’s infrastructure layer – transaction throughput should be increased. Mintlayer will implement Lightning Network, which also represents the solution for a real decentralized exchange (DEX) ecosystem to scale, thanks to the so-called “Lightning swaps.” Suppose two parties have a Lightning channel in Bitcoin mainchain and a Lightning channel in USDT on Mintlayer’s sidechain, then BTC and USDT can be exchanged with a DEX transaction without requiring any on-chain transaction. Not all users are expected to have Lightning channels though, but specialized entities (like liquidity pools) can act as intermediaries, exchanging with final users through on-chain atomic swaps, while having Lightning swaps with centralized exchanges (or other DEXs) so that all on-chain congestion between arbitrage bots that you currently see in Ethereum should be avoided.

The innovation happening on Bitcoin has only just started. By being the base layer for various infrastructure projects one layer up its stack, Bitcoin serves as a free marketplace for anyone to join and build distributed markets that complement and compete with one another. Through having these different options, the market can decide which one to choose.

Financial operating systems like Sovryn that represent Bitcoin’s third layer will have the choice to choose whatever infrastructure layer they consider best to launch their financial applications on. These financial dApps on Bitcoin will then represent the fourth layer. Wallets making it possible for users to interact with these dApps will make up Layer 5.

With more and more solutions emerging on all the different layers, Bitcoin’s multi-layered financial order becomes ever more tangible. There’s a lot of reason to suspect that because this financial order is built on a perfectly-designed base money and from there is gradually morphing out into the different layers, it will persist and in the long term triumph over all the other solutions currently out there.

The many layers of Bitcoin: 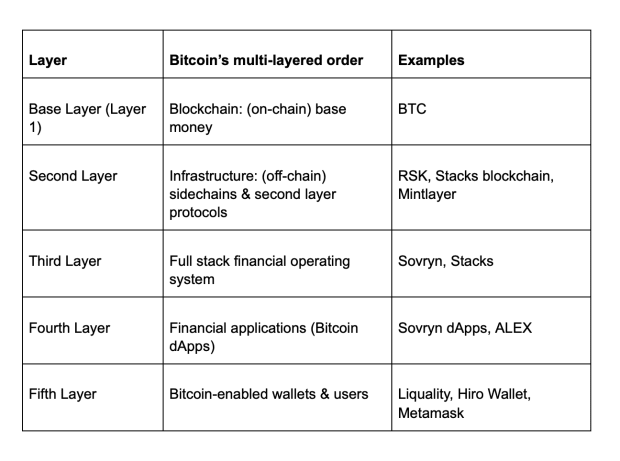 Ethereum After the Merge: What Comes Next?

The Final Countdown to the Ethereum Merge Has Officially Begun

ABOUT US
BTCME.com is an digital media, events and information services supporter for the digital asset and blockchain technology community. Its mandate is to inform, educate and connect the global community as the authoritative daily news provider dedicated to chronicling the space.
Contact us: [email protected]
© Copyright BTCME.COM 2023. All Rights Reserved.
MORE STORIES

How Does Cloud Mining Bitcoin Work?

Why are there only 21 million Bitcoins?